What I love about live music events is community amongst bands. When the bands go well together both musically and socially an energy is created where the band’s feed off each other when they go on stage. It’s what I call healthy competition.

If you have ever been to one of those shows where each band that comes on picks up where the last band left off you will get this. The Manchester Academy Metal Festival wasn’t about pretension or ego; it was about humble music lovers having a good night whilst surrounded by great bands.

With two venues and ten acts listed this was a night to open yourself up to a lot of new bands. There wasn’t one band I saw who failed to deliver!

Driven Overboard who travelled over from Southport brought with them the enthusiasm needed to kick off an event like this. With the drummer taking the lead vocal, it was something that turned many heads toward the stage. Some great ideas in there and genuine stage presence from the whole band.

There is something shocking about The Kandy Kreeps which always makes me want to see them again to see if it was a one-off. They bring this hypnotic character to their performance reminiscent of Marilyn Manson. The music is “Kreepy” as the name suggests but full of imagination.

Drastic Measures always get fully fired up about every show but tonight they were ready to make some noise. They connected with their audience and kept it unpredictable. Adam Tapper brought life as he paced around the stage and was full of confidence. 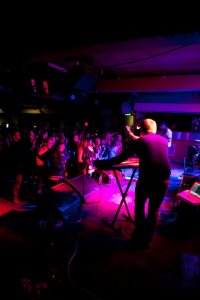 Our Day Remains were one of the less metal sounding bands but gelled nevertheless. They cranked things up and came out with a good set of songs that could have potential in the commercial world if hooked up with the right producer. Their melodic choruses caught the attention of most.

Heartbeats and Breakdowns have the sweet and sour vocal combo as they switch between storytelling and screamo. Everything was nicely in place in terms of song structure and arrangement. I believe this was one of their first outings as a band – good job guys! 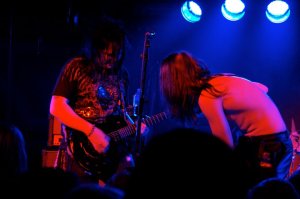 Terminal Hospitality, shirts off let’s do it! As TH opened the Academy 3 stage people were listening to the trio as they had a real fluency to the set. The songs were cohesive with the crowd and some of the guitar parts on “Rattle Snake” for example made a lasting impression. Terminal Hospitality have character and clearly love being out there.

Epiphany’s new songs have more depth and substance than ever before. They played with conviction and flair. As I paced down the hallway I could hear the change in mood as they threw in a cover of ‘What Is Love’ by Haddaway. This worked and broke the set up nicely.

Candid Iniquity made things clear that they had arrived. Genuinely voicing opinion on political issues made a room full of like-minded people who are passionate about peoples rights and changing the “system”. Tight band who know where they are going.

Before Incidium took to the stage, people were stirring and there was excitement amongst the crowd. What they delivered was a beautiful collection of well thought out guitar parts, time changes and integrated effects. They appeared entirely immersed in the sound coming from their amps and shells. The room suddenly seemed different. These guys like music and clearly spend a lot of time listening as well as writing.

By the time Visitor hit the stage the room was full front to back and everyone watched as the band pulled out some real powerful guitar riffs supported by subtle intricacies. The technical aspect of Visitor’s sound makes you question where songs like this begin. The single “Face of Fear” sounded great! Visitor had clarity in the sound like the tones had been carefully chosen to compliment another. Flawless.

The night came to an end and everybody took their thoughts and ringing ears home with them; feeling like they had experienced a truly astonishing event. Until the next one then…